With all due respect

I didn't spend much of my weekend trip to Georgia sightseeing (we were there for a wedding). But we did have time for a stroll around the Decatur Cemetery. Lots of great Southern names from generations past, but this one was my favorite... 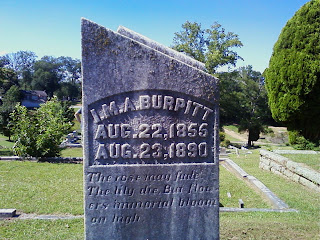 I will miss you, other "Mollie"! As young Mr. Grace would say, You've done very well.

Even if you've never seen Are You Being Served?, Sudgen's is an obituary worth reading.

After making shells for the Royal Navy in an armaments factory during World War II, she studied at the Guildhall School of Music and Drama in London. Her first role was the juvenile lead in “Dear Octopus.”

Truly the Greatest Generation. And did you know this?

“Are You Being Served?” was made in 1972 as a one-shot segment of another series, “Comedy Playhouse,” but when the killing of several Israeli athletes sent the 1972 Summer Olympics into chaos, the BBC, faced with hours of empty air time, rushed the series onto its schedule. There it stayed for more than a decade.

Why isn't that in the history books?!
Posted by Mollie at 9:52 AM No comments: