I reviewed the 2008 documentary Trouble the Water (now on DVD) at dotCommonweal. It's a moving, disturbing, inspiring view of the storm and the aftermath from inside the Ninth Ward. Not easy to watch, and impossible to forget.
Posted by Mollie at 9:41 AM No comments: Links to this post

As satire this is only middling. But as comedy, it's gold. And it must be healthy to take a break from moral outrage, however righteous, once in a while...


Is Using A Minotaur To Gore Detainees A Form Of Torture?
Posted by Mollie at 8:44 AM No comments: Links to this post

A secretary is not a toy

Today's NYT has an op-ed by Chiara Volpato (professor of social psychology at the University of Milan) complaining about the outrageously sexist behavior of Prime Minister Silvio Berlusconi. I know what you're thinking: if Italian women didn't like being sexually harrassed, why were they born in Italy? For real, though, this woman has a point. She has also won the award for the most wonderful sentence in today's Times -- part of a list of Berlusconi's recent exploits:

He designated a former model with whom he had publicly flirted to be Minister of Equal Opportunities.

Isn't that just too perfect? It's almost hard to be mad at the guy. It reminds me of how the upper management on Are You Being Served? always surrounded themselves with comically busty young ladies who serviced them as "secretaries" and "nurses." Minister of Equal Opportunities. I love it. (If you want an even more obscure British comedy reference, it's like in Yellowbeard when they're introducing the officers on the ship, and one of them is a shapely young woman with a very unconvincing false mustache whom they call "Mr. Prostitute". This is both hilarious and historically accurate.)

The other thing that makes it hard for Volpato to get her point across is the stiff English -- it's perfectly fluent, but it has that unmistakable nonnative feel. I'm actually rather fascinated by it, because when I try to pick out a particularly awkward sentence, I have trouble explaining just exactly why it doesn't work. It's all grammatical, but it just doesn't sound right.

At the same time, the sexism portrayed on TV reinforces chauvinistic ideas among the culturally weakest parts of the population. Researchers who study female body objectification need only look to Italy to witness the sad consequences of this phenomenon.

See? It's just... not right. Also not-quite right: the graphic that accompanies this piece. The clawlike lady's hand reaching up out of -- a plate of spaghetti? Aren't we trying to defeat Italian-culture stereotypes here? And why does that hand look like something from a horror movie? When I was a kid I read an illustrated version of the R.D. Blackamore novel Lorna Doone just because it had an illustration much like that one near the end. It looked really gruesome and cool. (Someone dies in a marshy fen, I think, suffocated by mud.) It makes me curious about this opinion piece, too, but in a different way. I think it may be an op-ed-art misfire.

P.S. Jason Linkins at Eat the Press had a similar reaction.
Posted by Mollie at 5:25 PM 1 comment: Links to this post

It ain't just a question of misunderstood

I know I never got around to elaborating on my review of the new Broadway revival of West Side Story earlier this year. In fact, it seems I didn't even link to it when I reviewed it for Commonweal, probably because it was available only to subscribers. By now I'm sure you've subscribed, in which case you can read the whole thing (I paired it with In the Heights, since -- as I noted back when I reviewed the latter on Restricted View -- there are many points of comparison). But if your Commonweal subscription hasn't kicked in yet, here's a paragraph I wrote about West Side Story that will give you the gist:


The current revival of West Side Story at the Palace Theatre was preceded by intriguing buzz: this version promised to revitalize the show by putting the Puerto Rican characters -- the Sharks -- on equal footing with the “American” Jets. In the Heights’s Miranda was recruited to translate some dialogue and lyrics into Spanish, and the Sharks would be played by Latino actors (not a priority in the ’50s). Unfortunately, the revival doesn’t live up to its hype. In fact, under the direction of ninety-one-year-old Laurents, West Side Story feels creakier than ever. The dancers simply go through the motions of Robbins’s choreography, and most of the musical numbers miss their mark. The costumes look improvised. The sets look cheap. The much-vaunted revisions turn out to be inconsequential -- the staging and acting are so limp that it makes little difference when, for example, Josefina Scaglione delivers Maria’s over-familiar final speech (“How many bullets, Chino?!”) in Spanish rather than English. Meanwhile, the score -- surely the best reason to revisit West Side Story -- is ill-served by the technological changes that have come to Broadway. The orchestra, stuffed beneath the stage, is muted and muffled, and the singers -- especially Matt Cavenaugh as Tony -- are too dependent on their mikes. Karen Olivo (a standout in the original cast of In the Heights) easily steals the show as Anita, but she is the lone bright spot in a disappointing evening.

I've been meaning to go into more detail here, but reliving the experience was simply not high enough on my priority list. Today, though, a new article in the New York Times has inspired me to return to the subject and comment on just one of the bad decisions that went into this production. The headline alone made me laugh ruefully: "Some 'West Side' Lyrics Are Returned to English." Took them long enough!

Read more »
Posted by Mollie at 9:27 PM 2 comments: Links to this post

She's right about one thing: this is "disgusting"

Why yes, I did watch the Jon Stewart/Betsy McCaughey interview, although only the part that was broadcast (I'd had more than enough by the time that was over). Basically, what James Fallows said sums it up: "She is just making it up, as anyone who has followed her work over the decades will know." I haven't followed her work, but it was still glaringly obvious to me that she was full of it. And given how little I know about legislation, health care, etc., I find it downright alarming that it was so easy for me to tell that all her talking points are arrant nonsense. It was also obvious that her preparation for the interview consisted not of boning up on the facts -- or even on her version of the facts -- but rather of putting on her game face. Smile like a beauty-pageant contestant; act like the audience is on your side; refuse to notice when you've been called out.

Fallows doesn't mention my very favorite part, which comes at about 3:45, when McCaughey first starts randomly flipping through her intimidating binder. ("How could I not know what I'm talking about when I have this big prop with me?") Stewart called her out for being completely dishonest and wrong about something or other in the bill, and by way of rebuttal she pointed to a page and said, "Guess what, the first time I read it I wrote 'disgusting.' See? 'Disgusting.'" Oh well that changes EVERYthing. Your interpretation must be correct, because your alleged emotional reaction backs it up!

Jon Stewart has been doing more and more "serious" interviews recently. The fact that he's become an important figure in the public discourse as an interviewer, and not just as a satirist, is partly a testament to him and his show, but just as much a testament to how pathetic and cowardly actual television news shows are these days. But he's still, at heart, a comedian, which manifests itself in ways that irritate me. In particular, he's always looking to riff on whatever his interviewee has just said with a punch line that redirects attention to himself. I don't care about this when he's talking to a movie star (in those cases I usually just turn the interview off). But when he's talking to someone who actually has some valuable information to communicate, I'd rather he didn't keep trying to steal the ball back. And when he's talking to someone who's spreading misinformation, as McCaughey was, I'd rather he didn't let them off the hook with a joke, as he does here. That tension in the room -- that incredulous "...Seriously, that's your argument?" burst of laughter from the studio audience -- is what makes this good TV. That's not the moment to open the valve and make everyone comfortable again.

Since I've been on an Arrested Development kick, I probably would have channeled Maeby Funke if it were up to me to reply: "Let's just sit quietly and consider how ridiculous that statement was."

Posted by Mollie at 2:12 PM No comments: Links to this post

There are dozens of us! DOZENS!

If the state of the health-care-reform "debate" in America has you hovering between dismayed and disgusted -- well, this charming photo essay at Blue Hampshire (which I found via Wonkette) won't make you feel better. But wait -- that last photo! In the midst of all this madness, I take it as evidence that there are still young people in America who remain focused on what really matters... Who hold out hope for change... Who will never admit defeat. Their cause is noble, and history will prove them righteous. 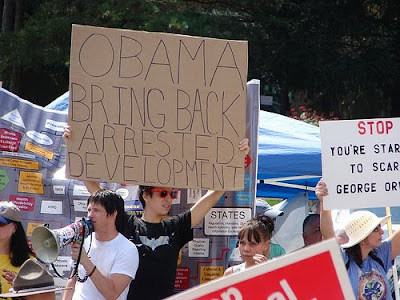 Yes we can!
Posted by Mollie at 11:36 AM No comments: Links to this post

If I can't take my coffee break...

When it comes to coffee, I am a Dunkin' Donuts devotee -- although most of the time, it's home-brewed. My parents started brewing DD coffee at home years ago, when I first developed my morning-coffee habit, and when I got the husband hooked I made him a DD fan too. Now he always makes the coffee at home, because he's much more serious about it than I am (there's a trick to measuring the beans I can't master, or honestly even understand). And it's always from Dunkin' Donuts.

Here's how addicted we are to Dunkin' Donuts coffee: we went on a three-day private retreat earlier this week, for which we rented rooms in a tiny lakefront cottage. We left behind many creature comforts -- which was sort of the point, it being a retreat and all -- but we knew they had a coffeemaker in the cottage, so we brought a bag of Dunkin' Donuts coffee grounds with us...because what were we going to do, just drink the coffee they had there? Please. There's asceticism and then there's mortification of the flesh.

So anyway, we like our Dunkin' Donuts. But lately we've been seeing all these ads for their flavored coffees, and they leave us scratching our heads. I mean, hazelnut I can understand, and even caramel, but who wants their coffee to taste like raspberries? Or blueberries? The other day I saw a print ad on the side of a bus shelter with this image: a cup of DD iced coffee covered with a square of red-and-white-checked fabric, like it was a jar of homemade jam. Which was a cute idea, except: who would find that appetizing? I don't want my coffee to be jammy, for heaven's sake. And if you do, you should probably switch to some other beverage.

Given all that personal history, I very much enjoyed Nathan Heller's piece at Slate this week taste-testing and ranking coffee from Starbucks, McDonald's, and Dunkin' Donuts. It validates my own preference (there's no contest, seriously), and I'm pleased to see such a frank and unapologetic acknowledgment that Starbucks coffee is really very bad. But the writeup is also very entertaining.

Read more »
Posted by Mollie at 9:15 PM 3 comments: Links to this post