We have come to the final page of my birthday book -- and, as you can see, Connor saved the best for last. 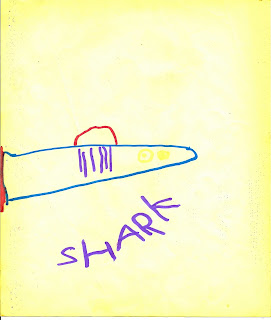 This makes me laugh each and every time I look at it. Everything about it is awesome -- the gills! The blunt top fin! The way it emerges from the left margin! The upward-slanting caption! But I think the yellow, different-sized eyes are my very favorite part.
Posted by Mollie at 9:33 PM No comments:

On the third page, Connor broke from the animal theme to do a portrait of me. I don't care to inquire about the not-so-subtle echoes between this page and the PIG drawing on the previous page. 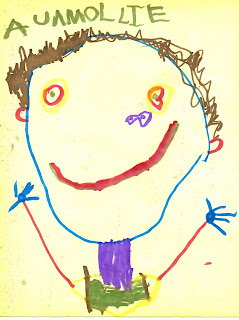 My hair is particularly short (and a little patchy) because this was created just about a year after I finished chemotherapy. "You're wearing one of those shirts with no sleeves that you wear," Connor told me when he presented the book to me. I really don't wear tank tops that often, but obviously my muscular upper arms made an impression. (Part one here. Part two here.)
Posted by Mollie at 11:04 AM No comments:

The new "Fall Books" issue of Commonweal has my review of Mary Karr's new memoir, Lit. Do check it out.

(Following this interruption we will return to your regularly scheduled posting of pictures from my birthday book.)
Posted by Mollie at 7:11 PM No comments:

My nephew was, and is, a lover of animals (an "animal expert," as he once put it), so the subject matter of my birthday book was pretty much a given. As you can see, he drew the animals with loving attention to detail. This one is helpfully labeled: 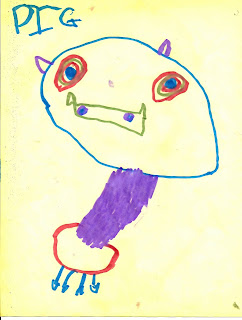 I love the concentric circles that form his crazy eyes. And of course his little blue hooves. And the nose! It's almost cubist. Part three coming soon...
Posted by Mollie at 11:19 PM No comments:

For my birthday two years ago, my then-almost-five-year-old nephew made me a book. It's been on our coffee table ever since, but the colors are fading rapidly, because he drew it using those "Color Wonder" markers that only work on certain kinds of paper. Good for avoiding messes; bad for archival purposes. Since the book is too precious to lose, we decided to make a digital copy, which means I can now share the book with all of you. The husband scanned it and then I increased the contrast to bring out the many different colors, an important element of the artwork (notice how many times he switched markers!). That's also why the paper looks so blotchy and yellow, by the way.

So, this is the cover -- click to see it bigger. 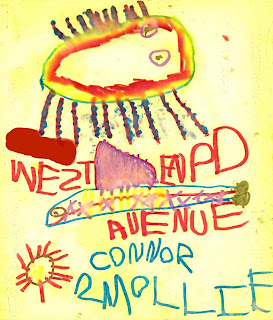 The artist explained it all to me at the time. I believe that's an octopus up top -- note the suckers on his many legs. There's a very detailed "X-ray fish" in the center, and a jellyfish (with a sideways smile) in the bottom left corner. He also wrote his address here on the first page, so either that's the title or he's combined the title and copyright pages. (I scribbled out the street number to protect his privacy, but I can tell you at least one of the digits is backward.) As for the part in blue, my sister told me he asked her, "Mom, how do you spell 'to'?" And then, before she could answer, he said, "...Oh, 'two'!" And so he wrote "2MOLLIE," Prince-style.

Stay tuned for the next page... And in the meantime, you can visit the Mother Load blog for more of Connor's excellent work.
Posted by Mollie at 1:53 PM No comments:

The Church has five new saints today -- as of about 4:30 a.m. EST -- and one of them, Jeanne Jugan, is an old friend of the family. I wrote about how she and her Little Sisters of the Poor have been part of my family's life over at dotCommonweal. I also happened to be awake (thanks to an upset stomach) to see the canonization rite more or less as it happened. The sisters in Scranton were watching live, too!
Posted by Mollie at 11:58 AM No comments:

1. Read this essay: a eulogy for Cookie magazine by my very own sister.

2. If you are planning to see the Vermeer show at the Met -- which is organized around the visiting masterpiece "The Milkmaid," and which runs between now and November 29 -- don't go when it's crowded. Do what you have to do to go when nobody else will be there, like on a Tuesday at 9:30 a.m. Because these are small pictures, and if you can't get close to them you might as well just go to the gift shop and look at the larger poster-size reproductions. I went yesterday at noon, thinking I'd beat the weekend crowds, but the place was a zoo. I can't say I was able to peacefully contemplate the play of light and shadow in Vermeer's little canvases while surrounded by people pushing and jostling and spacing out while listening to their audio guides and asking the guards, "Is there glass over top of this?" (And don't get me started on people who take pictures of everything they see in museums, because what is up with THAT.) I got the most out of my visit by retreating to the Medieval galleries and spending most of my time there. But the Vermeer show is small and cramped and really not worth the admission fee if you can't stand right in front of the paintings for as long as you like.

3. If you do go to the Met, especially when it's crowded, try to find your way to the "Visible Storage" area (which, on their not-really-all-that-helpful maps, is labeled "Henry R. Luce Center"). It's up some stairs in the back right corner on the first floor, and it's where they keep the American art they don't have on display. It's lined up in cases in this sort of friendly warehouse atmosphere, so you can walk up and down the rows and try to take it in. Lots of great paintings back there, plus furniture and many rows of fine silver and glassware and such. Spoons, old-timey baseball cards... It's like the world's greatest flea market. Plus it was a quiet spot in a museum otherwise packed with tourists.

Well, it was almost quiet. There was one guy there who was talking VERY LOUDLY to his companions, and intent on showing off his vast knowledge of art history (which, spoiler alert, was not really all that vast). So that was irritating, but it all paid off when he stumbled upon the case of American impressionists. "Mary Cassatt," he read from one of the identifying labels. "I thought that was Mary Cassatt!" Then, in his most professorial tone, he announced: "She was one of the first lesbians." On the other side of the case, I burst out laughing. Yeah, I... really don't think that's true.
Posted by Mollie at 8:55 AM No comments:

We all owe the Piv an apology

Back when the 2008 Broadway revival of Speed-the-Plow was struggling to make money for its producers in the wake of Jeremy Piven's sudden departure, I noted that the New York Times was doing everything it could to help. This is why the Times has such a glowing reputation in the theatre community for using its power responsibly, and for trying to be as fair and generally supportive of high artistic standards as possible. Oh, wait...

Today's report on the details of the arbitration between Piven and the producers of Speed-the-Plow producers does not depart from the pattern when it comes to that show. Headline: "An Inside Look at an Offstage Drama" (or, if you look at your title bar, "Inside Jeremy Piven's Offstage Drama With 'Speed-the-Plow'"). Yes, reading the background details is interesting for theatre gossip buffs, and I suppose those same buffs were all over it when the outcome of said arbitration was decided back in August. The Times did report that back in August in a perhaps-too-even-handed story by Dave Itzkoff... but at the time they didn't have the details of the confidential arbitration to report on, just the statements from both sides. Now they're telling us what the arbitrator actually said, and for the sake of the general public reading this first-page-of-the-arts-section story, you'd think writer Patrick Healy might mention the outcome of the arbitration somewhere near the top, instead of more or less as an afterthought at the end of paragraph four. For the record:

The arbitrator, George Nicolau, ruled in the actor’s favor in late August.

In other words, Piven won. Something to keep in mind when you're reading through the he-said, they-said details in the rest of the piece. One side was ultimately found to be more convincing than the other. Oh, and also: he had mono? That's a new detail, isn't it?

I was as skeptical as anyone back when this happened; I did my share of joking about "mercury poisoning" and such. (I should have suspected, when David Mamet made his wiseass comment about Piven preparing for a role as a thermometer, that Piv was actually sick -- from what I've seen of his essays, when Mamet's being funny, he's not being honest.) It was certainly tempting to believe Piven was a lightweight, especially when he was making statements invoking (I think?) Barack Obama in his defense. Healy did write an article that offered up Piven's side of the story in February -- and I can't say that inspired me to rally to his cause (Martin Luther King, Jr.? Really?). Also, for the record, I quite liked the production (which I reviewed here). But still, all the valentines from the NYT after Piven's departure left me wondering how, exactly, you manage to buy that kind of "bad press." And I guess I'm still wondering.
Posted by Mollie at 9:32 AM No comments:

The chain of hat-tipping is particularly convoluted and random: Andrew Sullivan linked to an essay published months ago in Commonweal, which he'd found via this blog. I don't know this blog and have never seen it before, but it can't be all bad because it recently posted this video, which I decided I had to share with you right away.

My favorite part is the exasperated sigh Sherlock Hemlock gives John-John when he interrupts. Bert's subtle double-take when John-John takes over the segment is also awesome. Every time I watch Sesame Street now I grieve for the old-time muppeteers.
Posted by Mollie at 6:09 PM No comments: