I've noticed typos here and there in The New Yorker over the past year or so. At first I brushed aside the conclusion that things are getting looser over there; perhaps I'm just getting better at this, I thought. (You don't turn off the error-detecting software when you're out of the office.) I try not to freak out too much about the impending Death of Print Journalism, for obvious sanity-preserving reasons. But then, in the December 13 issue, two mistakes in the same article! This is alarming. Are there any full-time copy editors and proofreaders left at Conde Nast?

The article, for those of you playing along at home, was John Lahr's profile of Elia Kazan, "Method Man." On page 91, third column, a missing close-quote:


it was Kazan, newly promoted from stage manager to actor, who shouted the play’s famous last lines—“Strike! Strike!! Strike!!!—which became the battle cry of the thirties.

And on page 93, first column, the true mark of a copy editor asleep at the switch: homophone confusion!

And I was able to copy and paste both of those from The New Yorker's website, where they still haven't been corrected. O tempora! O mores!

Meanwhile, the December 20 & 27 issue is one of those double issues I spend half as much time reading. It feels like half the staff is already on vacation and the other half wishes they were. First of all, Ian Frazier is peerless and wonderful, but these lame "Cursing Mommy" pieces -- does anybody find them funny? And we also get a bonus not-funny "humor" piece, "Santaleaks" -- really? Also, am I the only one who noticed that the cartoons on page 54 and page 68 are the same joke? In both, someone is about to be executed. Page 54 caption: "His highness is changing his relationship status." Page 68 caption: "I'm about to enter an area of poor reception." (Technological phrases in incongruous settings, am I right?!) At least put them in different issues.

However, you will doubtless be pleased to know that this same issue has a feature article by our old friend John Colapinto. It is a work of breathtaking and unquestionable genius. I haven't read it. So time-saving to know I needn't bother! (P.S. If you haven't seen that old post, or it's been a while, you really ought to check it out again. The entertainment value never wanes.)

P.S. Speaking of works of genius, you can read my review of Gary Shteyngart's novel Super Sad True Love Story in the latest Commonweal -- but only if you subscribe.
Posted by Mollie at 1:27 PM 2 comments: Links to this post

In praise of women 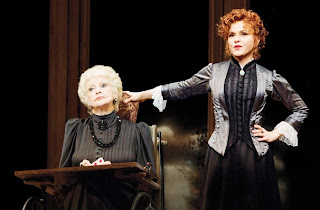 I don't know about the summer night, but the gods were truly smiling on me the evening I went back to see A Little Night Music. I'd been putting it off, trying to come to terms with my mixed emotions. On one hand: Bernadette as Desiree! What could be more tantalizing? On the other hand: this thoroughly disappointing production! What I wouldn't give for a do-over. Erase the memory of this whole thing (especially Catherine Zeta-Jones's hilarious, horrifying Tony Awards performance) and start over, with a production custom-built for Bernadette and directed by, oh, anybody else. As they say, it would have been wonderful. Alas, that will never be; if I want to see Bernadette it's Nunn's Night Music or none at all.

Circumstances conspired to give me the best possible experience, and for that I'm very grateful (I only wish I could guarantee that you would have the same circumstances align for your trip -- and you'll have to hurry, because the show is closing January 9). First of all, unlike the last time -- when I got a rear mezzanine seat and paid too much for it -- I got a half-price center orchestra seat for a Tuesday-night performance, and was delighted to find the seats in front of mine unoccupied. Talk about an unrestricted view. When I entered the lobby I checked the "At this Performance" postings, holding my breath -- any time I have a ticket to see Bernadette, I arrive half-convinced it's too good to be true and she will not be appearing that day. But there were no understudies listed for Desiree or Madame Armfeldt, and -- oh happy day -- there was an understudy listed for Anne! I had quite literally been dreading seeing Ramona Mallory again, having found her performance "actively painful" the first time around, and fate had offered me a reprieve. I practically skipped to my seat.