I felt better after getting all my New Yorker-related gripes off my chest Saturday. When I came home tonight to find a brand-new issue waiting for me -- dated January 4, 2010 (!) -- I was ready to start fresh. But... I think there's something wrong with my New Yorker, you guys. 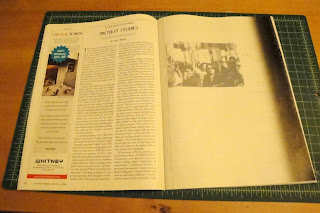 At first I thought this spread was supposed to look like this. Innovative design choice, I said to myself.

But the next spread was half blank too. 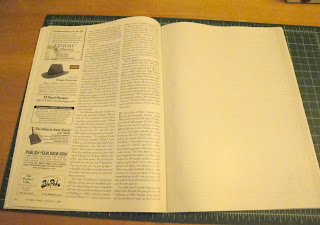 I saw this and felt a pang of insecurity... is this a test of some kind? Am I failing? 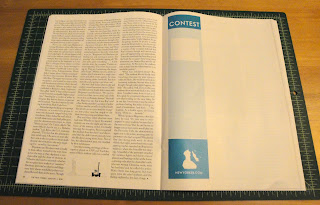 But no, I'm pretty sure they didn't intentionally blank out half of Tad Friend's article. The first page of "Shouts & Murmurs" is missing, too (which will spare me from trying to solve the "quiz," always a frustrating exercise, because the New Yorker refuses to modify its layout to make the "quiz" format functional).

On the plus side, I won't have to decide whether I'm in the mood to read the latest piece by Adam Gopnik! (That left column is supposed to have text in it, and several other pages are blanked out. How long was this article, anyway?) 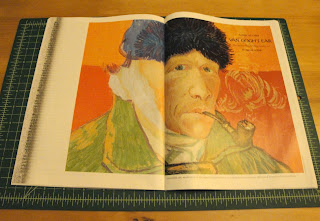 The good news: no pages missing from the Uwem Akpan story. Guess I'll start there.
Posted by Mollie at 8:14 PM 1 comment:

As you know, when my subscription ran out at the end of 2007, The New Yorker and I took a break from our relationship for a while. We had grown apart. It was for the best. But I got a new subscription as a birthday gift, so we're back in touch, and I'm pleased to say I'm in a much healthier place now. I don't feel pressured to read every page. It's not scripture, for heaven's sake, it's a magazine. So I've learned to skip the things I know I won't like, and spend my precious magazine-reading subway time on the articles I'll find satisfying. Nowadays that means I spend most of my time on the feature articles, and of course the Hertzberg (or Packer) editorials at the front of "Talk of the Town." Otherwise the "Talk of the Town" shtick has gotten a little stale for me, so I tend to breeze through those quickly. If "Shouts & Murmurs" is half-baked or underwritten, as it so often is, I move along rather than brooding over the lost opportunity. I try to read the "financial page" -- I usually learn something -- and there is almost always at least one feature article to savor. (The most recent issue was an exception, for me, but I expect to be bored by the "theme" issues.)

And then there's the critical reviews, which used to be my favorite part. Alas, I'm afraid the thrill is pretty much gone. You already know about my disenchantment with The New Yorker's theatre coverage: I learned some time ago that one shouldn't read John Lahr before seeing the show he's reviewing, because he writes as though his readers will never see the show under discussion -- he repeats all the best jokes and always spoils the ending. But since his West Side Story rave he's been downgraded from "Don't read till after I see the show" to "Don't bother reading at all." And as you know, Hilton Als was already in my "Don't bother" column. When it comes to movies, I had more patience with David Denby than some, but I lost it when he published Snark. That just leaves Anthony Lane, and I still read (or at least skim) his stuff, but it's not the scintillating experience it once was. The guy needs a long vacation.

Alex Ross and Sasha Frere-Jones are still a good read (provided I care enough about whatever music they're covering). I used to admire Nancy Franklin's offhand style, but it's been a long time since I thought she actually delivered the goods in her TV column. And the last issue of The New Yorker reminded me of one more source of dissatisfaction: Joan Acocella.

Based on a novel by a man named Lear

Over at Hey Dullblog -- the occasionally updated group blog for Fab Four fans and obsessives -- you will find my thoughts on the twin Beatle-bio reviews in this week's New York Times Book Review. Nellie McKay decided to make her contribution, a review of the latest Lennon bio, interesting by writing a la In His Own Write. Do you think she pulled it off?

Suzanne Vega took on the new McCartney bio, which sounds pretty lousy. I quoted a few lines from her, too, in my Dullblog post, but I wanted to bring this bit over here, given Restricted View's history with disappointing Macca-related journalism.


One line about McCartney, which reads like a comment from a rejected suitor, reveals the possible source of this disappointment: “He grants interviews to bloggers and alternative weeklies, even as he turns away some major magazines (and biographers).” Perhaps the author made a bid for his subject’s cooperation but was turned down.

Seems pretty likely. And yet, is the author's description of Sir Paul's media policy accurate in a general sense? Not unless The New Yorker is an alternative weekly. He gave their writer a lot of access, you may recall. Based on the rest of Vega's review, I don't think he turned down the chance to participate in the making of this book just because he was feeling anti-mainstream.

Posted by Mollie at 6:20 PM No comments:

Are we still talking about that?

Here is a partial list of things I thought would go away if I just kept ignoring them:
Obviously, this strategy is not panning out as I'd hoped. I suppose it must work for me sometimes, but I can't think of examples. (If I could, it wouldn't have worked!) All I know is, every time I walk past a newsstand, or flip past a cable news channel, or open a browser window with an AP feed, I see something about Tiger Woods and I think, "...That's still a thing we're talking about? Really?" And yet here we are. The culture is leaving me behind once again.
Posted by Mollie at 3:02 PM No comments:

An alternative view of Central Park

This summer, the husband and I took my nephews to see Up (which was excellent, by the way. I highly recommend it). Five-year-old Seamus sent us this drawing as a thank-you note. (Click to enlarge.) It's helpfully captioned by his mother: "This is Central Park and you can go uptown or downtown and I am in a truck." 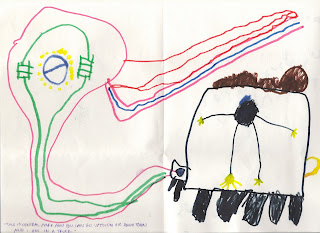 The truck is very detailed. Check out those tires -- and the taillights! I'm not sure what that brown stuff is (is it a dump truck?), or why Seamus is riding in the bed instead of the cab. But I haven't had a chance to ask.

Even more fascinating is his representation of Central Park, and (I guess) the roadways around it. To me it seems inspired by subway maps -- although it looks more like this alternative one than the official MTA version that Shea would have seen. It could also be influenced by those maps they have in the backseat of taxicabs to help you figure out where you are... I can't find one online, but New Yorkers will know what I mean.

Once, I picked up Seamus's older brother at school and took him somewhere in a cab. He was probably about five at the time -- maybe four. When we settled in, he was sitting with the map right in front of him, and he pointed to it and said, "Doesn't that look like a rhinoceros?" I can still picture him pointing, with his little mittened hand and his short arms making it difficult for me to tell what exactly he was pointing to. But I looked at the map, and specifically at the paths winding through Central Park, and: he's right! It does look like a rhinoceros! Now I look for the rhino map whenever I'm in a taxi. Kids are the best.

On the back of his magnificent picture, Seamus wrote a message: 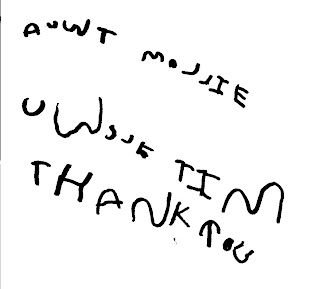 You're very welcome!
Posted by Mollie at 2:13 PM No comments: