I've come close a few times to posting here about Jack Shafer, Slate's press critic. I'm always up for good media criticism, and Shafer sometimes offers that. I'm also always up for pointing out bad media criticism, and Shafer occasionally delivers that too. For an example of the former, see this article of his on the mindless use of hyperlinks. It's right on. For an example of the latter -- which usually manifests itself in his case as a lack of perspective -- I'll send you over to Kate at Cali-for-nyaah, who (in a post I bookmarked long ago) puts it much better than I could:


In his better moments, Mr. Shafer is a impish avenging angel, swooping down on weasel words and wringing the breath from ill-researched trend stories. For these acts of righteous journalistic vengeance, I have nothing but gratitude. But for whatever reason, Mr. Shafer is drawn to the Personal Yarn as if it were the journalistic killing fields, site of all that is horrifying and unethical in the world.

Yes: when he found out David Sedaris's "nonfiction" essays aren't 100 percent true, Shafer was OUTRAGED. I suppose that should have been a sign, looking back, that he approaches his job with a tad more credulity than is healthy.

I say all that because this week he took notice of Scott Horton's devastating Harper's article on the so-called suicides at Guantanamo, and the results were embarrassing. I posted about it at dotCommonweal, so I'll send you there for the rest (and the relevant links). However, if you haven't yet read Horton's piece for Harper's, please go there instead. Your time will be better spent reading the original article than reading about pathetic attempts to debunk same.
Posted by Mollie at 3:01 PM No comments:

One of the great things about working for a magazine with an 85-year history is our vast and fascinating archives. I haven't read much J. D. Salinger (just The Catcher in the Rye in high school, like everybody else), but I knew Commonweal must have published lots of interesting articles about him over the years. I spent this afternoon digging up and posting two of the best, and if you're a fan of Salinger, midcentury fiction writing, or snappy literary criticism, I encourage you to check them out. Just go here and follow the links to find out what critics had to say about Salinger in 1957, and what occasioned this fabulous sentence in 1963: "And then there is Mary McCarthy, thumbing her nose in a kind of bitchy pique."
Posted by Mollie at 6:22 PM No comments: 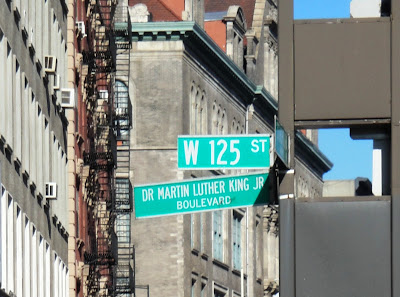 Today was a beautiful, sunny day, so I took a walk uptown, and brought the camera along. A few sights from my stroll through Harlem and Morningside Heights on this Dr. Martin Luther King Jr. Birthday (Observed)...

Yes, I watched "Rebels" again, and yes, it was as hilarious as I remembered. Above, sample dialogue. Some other great details: Lennie, annoyed after Rey finds yet another clue via e-mail (and by "e-mail" I mean "a white screen with text on it that appeared on Rey's display without his having to press a single key, which is just as well since he was evidently connected to the internet via a nonexistent wireless hookup in the police station"), grumbles, "This 'e-mail,' whatever the hell it is, it's gotta have a return address, right?" Which was funny because it actually didn't. The "headers" onscreen included only a "to" line. So Briscoe and Curtis go to some special computer-geek cop who helps them track their online correspondent. "His modem's hooked up to a cellular phone," Rey explains to Lennie. Riiight. So that's how they end up riding around in their car, with Lennie driving and Rey sitting shotgun exchanging "e-mails" via yet another magical internet connection, while the police geek sits in the backseat holding a gigantic antenna that's tracking the signal from the guy's cell-phone modem. Obviously.

Once the detectives bust the guy we move to the courtroom. Amusingly, the case takes up the question of the press shield law and how it applies to online journalism (or what Claire calls "computer bulletin boards"). Funny how that debate, at least, seems sort of current, even though the writers plainly had zero firsthand experience with the Internet at the time they wrote the episode.

More information about crimes can be found on the Internet

Almost exactly three years ago, I posted about a hilarious rerun of Law & Order in which Det. Rey Curtis used his computer skills to access valuable crime-solving information on the World Wide Web. Well, get ready to laugh, because that episode ("Rebels," from 1995) is coming up again in the rotation on TNT. Set your DVRs to catch it tomorrow at 4 p.m. (ET). There was so much we didn't know then...
Posted by Mollie at 6:12 PM No comments:

I've just finished reading Lauren Collins's sporadically entertaining, generally shapless profile of Justice Sotomayor in the Jan. 11 New Yorker. Yes, this time I had all the pages. And there were a lot of them, because this article was really long. You know that feeling when you're reading an article that you think has gone on long enough, and you turn to a new page, and you look in vain to the lower right corner for the little box that marks the end? And then, when you see it keeps going, you say, "Oh, come on, how long is this?" I did that three times while I was reading this story.

It had its high points. Here is a sentence I particularly liked:


Scalia, a few years earlier, had become embroiled in a conflict-of-interest drama after going on a duck-hunting trip with Dick Cheney; Sotomayor once recused herself from a case because, she wrote, “I was a member of the BJ’s Wholesale Club Inc.”

An excellent comparison. Says a mouthful, with no need for elaboration. Unfortunately this economy of expression did not extend to the entire profile. In fact, here is an excerpt from the next paragraph that ticked me off:


Sotomayor’s mode of expression can be inelegant. Her writings are marked less by any special rhetorical force or philosophical clarity than by a prosaic approachability. In Farrell v. Burke (2006), she invoked Carrie Bradshaw: “The State’s definition of pornography as material depicting sexual conduct and ‘designed to cause sexual excitement,’ if applied, would cover not only materials such as Scum but also popular television shows such as ‘Sex and the City.’”

So by "invoked Carrie Bradshaw" you mean "displayed an awareness that Sex and the City is a popular show on television"? I know this is an attempt to be cute, but if Sotomayor's judicial opinions are really marked by "prosaic approchability," this isn't convincing evidence. More seriously, the mischaracterization of this quotation seems particularly irresponsible when you're talking about a woman who was smeared by political opponents as an intellectual lightweight. Because make no mistake: if a circuit court judge really did "invoke Carrie Bradshaw" in an opinion, say by quoting a braindead "insight" from that character's supposedly popular column ("It sometimes seems as if the pursuit of romantic commitment will end up having us all committed!"), then I would want someone to write an article for The New Republic about how said judge was too stupid for the SCOTUS. But that's not what happened here, thank God.

Collins takes a few swings at contextualizing and interpreting the infamous "wise Latina" remark, but they're all misses, it seems to me. And then there's this:


In all the commotion over Ricci and “wise Latina,” the senators had missed what was perhaps a more inflammatory statement. In 2000, at the graduation ceremony of the Bronx Leadership Academy, Sotomayor had said, “It is so exciting to be at the door of a major change in one’s life. That’s why brides and bridegrooms smile so much at weddings and why so many tears of joy are shed when a wanted child arrives”—her unprompted use of the phrase “wanted child” acknowledging the possibility that an expectant parent could feel otherwise.

I see what you did there, trying to think like a Republican operative, but that's...embarrassing. First of all, if the word "wanted" has you confused, try subbing in "longed-for." Get it now? Second, I didn't think it was possible to underestimate the Karl-Rove types who pretended to believe Sotomayor was a "bigot." But even they are not dumb enough to think the mere suggestion that some pregnancies are not "wanted" is "inflammatory." Trust me: the people out to gin up conservative sentiment against Sotomayor didn't "miss" that statement. They just knew it would be difficult to find anyone who'd object, even in bad faith, to the image of new parents shedding tears of joy over the birth of their child. News flash: pro-life people know that not all pregnancies are "wanted." Hey, maybe your next 80,000 word article could focus on that!

The era of ragtime had run out...

"I have good news and bad news. The good news: I just saw a really good semi-professional regional-theatre production of Ragtime. The bad news: it was on Broadway."

That's the opening line I was planning to use when I reviewed the new revival of Ragtime, which I saw way back in November. I was really excited about posting a review here, I swear. But I came down with a cold that sapped me of all my physical and mental strength (...twice!), and then Christmas, etc., and now it's pretty much too late: the show is closing tomorrow. Ah well. For posterity -- and for those of you who didn't see it -- that's the short take: from your local theatre guild, at local prices, it would have been worth seeing; on a Broadway stage it was an expensive disappointment.

And expensive it was. Let's just get that out of the way. On the night I saw it, the seats we had (front row center mezz) were priced at $137 each. That's obscene. I love the theatre more than most, but come on. I would say "There's a recession on!" but really, let's not blame the economy. Even in flush times, nobody should be paying that much for a ticket, unless they get a free iPod with their Playbill. And recession or no, I wasn't going to pay full price, of course, so I stood in line at the TKTS booth and got them for half off -- $70 each. Which is still too much. The mezzanine was half empty that night, and I can't say I was surprised. Every time a show closes soon after it opens, arts journalists and producers and critics line up to play coroner. "It was too soon," "The reviews were just too mixed," "No big-name stars," etc. If you find yourself listening to or reading a post-mortem of this kind, and your expert doesn't mention the exorbitant cost of seeing a Broadway show today within the first sixty seconds/two paragraphs, walk away, because they're ignoring the obvious. A business model that prices tickets at well upwards of $100 is a broken business model, and the fact that it sometimes works out in producers' favor doesn't change that. The end. (On the topic of Ragtime, however, I am just getting started. And I can finally put jump breaks in my posts! Thank God, because this is a long one. Click through for more.)