Time to start getting the nets out 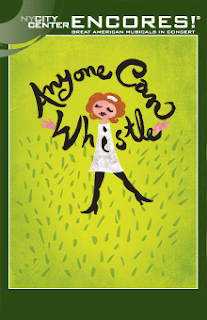 I always assumed that Anyone Can Whistle made some kind of sense. I knew it was whimsical and wacky and all that, but I figured, if I saw the whole thing intact, it would have some discernible throughline. Not so much, as it turns out!

This is too bad for me, because I've been staging imaginary productions of Anyone Can Whistle in my head for years, based on the 1994 Carnegie Hall concert version starring Madeline Kahn, Scott Bakula and Bernadette Peters. I was excited when I found out the show was slated for Encores! in this, the Year of Sondheim: at last I would see the whole show, book intact, and at last I would know what goes between the songs to hold the whole nutty thing together. But unless the version I saw at City Center was seriously truncated (and it sure didn't seem edited), the fact is, the book isn't so much quirky or cutting-edge or experimental as it is half-assed and terrible. (The reviews I saw tiptoed around saying that outright: another case of Arthur Laurents getting off the hook?) The show makes even less sense than it did when I had only the recording to work with. Who knew.

So there's no way to make Anyone Can Whistle "work." I was still surprised that Casey Nicholaw -- whose Follies for Encores! I admired very much -- didn't come a little closer.
The story won't flow or rise above its handicaps no matter what you do, but the one thing that might help is strong characterizations, and this production was missing that almost across the board. Limited rehearsal time is probably a major reason so few of the actors seemed to have a handle on the characters they were playing. (A paradox: you'd have to put way more time into rehearsal in order to make this unworthy-of-a-full-scale-staging musical worth the trouble of even a small-scale production.) Still, if the world of the show doesn't even seem comprehensive on the stage -- if the actors themselves aren't quite convinced it's real -- how can the rest of us hope to be affected by it?

Raul Esparza came off best, in terms of characterization and preparation. I've complained about him in dramatic roles -- I always feel like I am watching him act; like he wants me to notice how intense he is. But in this case he was lighter and looser (as befits the material), and he knew his part as well as anyone onstage. He sang well, though in my opinion he was a little too eager to demonstrate how well he can sing. His Hapgood was a good start. Sutton Foster is always a good start, but she was saddled with the blankest "character" in the script: there's no making sense of Fay Apple, and Foster's strong presence wasn't really enough. It made me realize, not for the first time, how much work Bernadette Peters does to find an aching heart in made-of-cardboard characters.

As for Donna Murphy, I can only say that I wish she were as funny as she thinks she is. Flip my response to Esparza: Murphy should stick to emotional intensity, Fosca-style, and leave the comedy to someone else. What bugs me about her "comic" stylings is that she gets all her laughs around the edges of the script instead of through it. In a case like this, where lack of rehearsal is affecting everyone, it's particularly obvious that she spent too little time thinking about who Cora Hoover-Hooper is and why she says the things she says, and too much time thinking about what faces she could pull or what ad-libs she could throw in to get a rise out of the audience. It was a "funny" performance, but it didn't get across anything about the Mayoress.

I had a brainstorm as I was watching -- once I gave up on Murphy's doing anything revelatory with the role and busied myself thinking about how it could have been done. The Mayoress was dressed in a mod pink suit, Jackie O. style (although not much else about the production signaled "1960s"). But Jackie O. is the wrong reference. Cora Hoover-Hooper is a Sarah Palin figure. Think about it: mayoress of a bankrupt town, completely uninterested in policy, totally committed to the politics of identity and image, even to the extent of manipulating religion to keep the "peasants" in line. "A lady has responsibilities... to try to be popular with the populace! (She's unpopular with the populace!)" It's a perfect fit, right? That scene where Cora and her city-government henchmen scheme to come up with a suitable label for Hapgood -- "What shall we label him, my friends? / A phrase that the rabble comprehends..." What is that but a spoof of Rovean campaign politics? The cynical decision to use false piety to win back popular support -- labeling your opponent an "Enemy of Heaven" -- there's your topical satire. There's at least one element of the show that would feel prescient instead of trite and dated. Sadly, this production didn't go there. Cora's machinations didn't make a lick of sense, even aside from topical significance. The government lackeys were so underdeveloped and ineffective I got the impression they had never done a runthrough together before I saw them in performance. (Jeff Blumenkrantz was particularly badly cast as Treasurer Cooley -- for one thing, he seemed not to understand why his character ended all his utterances with "Brother" or "Sister.")

Even if my contemporary-political-commentary idea had made it to the stage, it couldn't do anything about the rest of the show's "satire." Michael Feingold said it perfectly:


Whistle's elements barely fit together: The dialogue's tone lurches from wisecrack to sermon; the musical numbers balloon or shrink like Alice munching alternate sides of a Wonderland mushroom. There's no discernible narrative arc; you're never sure whether the story's about political corruption, the evils of capitalism, or the pressure to conform.

Don't forget cynical manipulation of religion, and the struggle of belief vs. rationality. All of those topics come up, but the show doesn't have a sustained insight about any of them. The sharpest wit is in the lyrics (not that you'd know it from Donna Murphy's delivery! How do you sing "...And it's holier than thine" and not get a laugh?). But it flits from topic to topic, and there's nothing in the book to pin it all down.

As I was walking out of City Center I heard an elderly woman say to her husband, "Gee I hated that! ...And to think we paid money for it!" I always assumed the audiences in 1964 were to blame for Whistle's failure. Now I realize they weren't so ungrateful after all.
Posted by Mollie at 9:10 AM