Previously on Restricted View, we noted with approval that Stephen Sondheim does not like it when someone levels a negative judgment against a work of theatre that he or she has not seen. When John Lahr did so with Sweeney Todd, according to the account in Finishing the Hat, Sondheim complained to the editor and "then wrote Lahr himself a letter, saying that although it was his privilege to give a show both barrels of his contempt, I thought he ought to see it first."

Maybe that Stephen Sondheim ought to have a talk with the Stephen Sondheim who wrote this crankypants letter to The New York Times, unloading both barrels of his contempt in the direction of the new Broadway-bound production of Porgy and Bess and everyone connected with it (all women, incidentally) based on what he read about it in Sunday's arts section. Because that seems like something the Stephen Sondheim who complained to John Lahr might think twice about doing!

For what it's worth, I read Patrick Healy's piece on the new Porgy and Bess with interest, and without forming a strong opinion. I know and love the score, or at least the score's highlights, but I haven't seen the show and can't evaluate the judgments of Diane Paulus et al. one way or the other. They certainly sounded plausible to me. Perhaps they're totally wrongheaded, but if so, the proof will be in the pudding, and I'm curious to see how it turns out. Sondheim seems to have been set off by the perceived disrespect for DuBose Heyward (the letter reminded me that "Ira Gershwin wasn't all that great" is one of the tiresomely repetitive motifs in Finishing the Hat), and he may have a point there. But he went on from there at great length in many surprising directions. For one thing, I'm pretty sure I've heard him say things about the shortcomings of opera in general that line up closely with what Paulus et al. said in Healy's story, making his touchiness here seem odd. There's also the fact that he has been sanguine, even defensive, about revisionary takes on his own work that seemed to me much more obviously misguided than what the Porgy team is undertaking at ART. And then there's the fact that attacking fellow artists -- in such personal terms -- without letting their work stand on its feet first is, as they say in French, kind of a dick move.

What's the bitchiest part of the letter? Tough call, but I think it's this, which left me wondering, "What did Audra McDonald ever do to you?":


[Audra McDonald] says that Bess is “often more of a plot device than a full-blooded character.” Often? Meaning sometimes she’s full-blooded and other times not? She’s always full-blooded when she’s acted full-bloodedly, as she was by, among others, Clamma Dale and Leontyne Price. Ms. McDonald goes on to say, “The opera has the makings of a great love story … that I think we’re bringing to life.” Wow, who’d have thought there was a love story hiding in “Porgy and Bess” that just needed a group of visionaries to bring it out?

Who'd have thought there was a tetchy letter-writing crank hiding in Stephen Sondheim that just needed an article about a bunch of women experimenting with Porgy and Bess to bring it out?
Posted by Mollie at 5:27 PM No comments: Links to this post

Safe at home with our beautiful prize

"Since Celia's baby was born, she had a new sense of her mental solidity and wisdom. It seemed clear that where there was a baby, things were right enough, and that error, in general, was a mere lack of that central poising force."
- George Eliot, Middlemarch 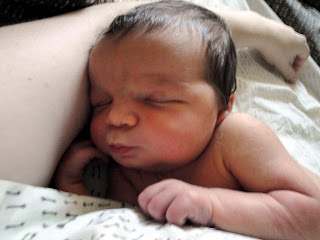 So, the happy ending: We have a son! His name is Martin George. He was not quite as enormous as predicted. And he's wonderful.
Posted by Mollie at 11:48 AM 3 comments: Links to this post