Credits where credit is due

Whether or not you make it to Kathy Griffin's run on Broadway, I commend to you her Playbill bio, which you can read here (beginning with paragraph 3). Much of it falls under "trying too hard" or "anxious to let you know it's funny" -- compare and contrast with Eddie Izzard's understated joke-bio from Joe Egg -- but there are a few excellent lines. My favorite is this credit: "Neil LaBute's I Hate You But I Won't Say It Till It Can Do the Most Damage (Dead Whore)."
Posted by Mollie at 9:11 AM No comments: Links to this post 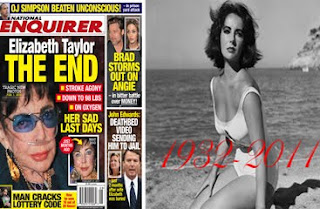 Not long ago -- perhaps on seeing the tab cover pictured here -- I said to the husband, "I wonder what tabloids like The National Enquirer will do once Elizabeth Taylor actually dies." They've been reporting from her supposed deathbed for so long that I'm pretty sure I first encountered Dame Liz in that context -- standing in line at the supermarket as a kid, noticing that this lady, whoever she was, was "near death" yet again. I guess now we will find out who takes her place. This graphic, by the way, comes from the Enquirer's website, where they are just giddy with the news: "As The ENQUIRER exclusively first reported Taylor's days were numbered when she was first rushed to the hospital six weeks ago." Yes, well, broken clocks.

Farewell, Dame Liz. I hope they're airing Dancing with the Stars wherever you are. (I note with some sadness her final tweet, from February 9: "My interview in Bazaar with Kim Kardashian came out!!!")

But seriously, folks, a tribute is in order. If you had to choose a Liz Taylor movie to watch this week, which would it be?
Posted by Mollie at 10:58 AM 2 comments: Links to this post

This is why Mom makes you eat the crust 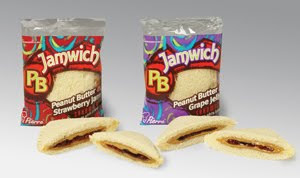 I was always told eating the crust on my sandwich would make my hair curl, which turned out to be a lie. But apparently the crust has a more vital role: it protects your sandwich from "contamination."

SCRANTON - Giant grocery stores have removed "Peanut Butter and Strawberry Jamwich" crustless sandwiches, manufactured by Pierre Foods, from the shelves after being warned of possible contamination.

I saw that headline and fully expected the text of the article to read, "Obviously. Because they're disgusting." But the truth is much more sinister. You can return your Jamwiches to the Giant for a free refund. The only problem is you'll have to admit you bought them in the first place.

P.S. Reader challenge: Apparently they also sell these things in vending machines. How hungry would you have to be before you bought and ate one? Leave your nightmare scenarios in the comments!
Posted by Mollie at 9:50 AM 1 comment: Links to this post

Departing from the formula

I direct your attention to a fine "critiquing the critics" post over at dotCommonweal -- written by my colleague Paul Moses, who took issue with Ben Brantley's review of That Championship Season. Paul hasn't seen the production under review, and neither have I, but I think he's right to be surprised by Brantley's attack on the play itself. It's out of character for Brantley to strike this edgier-than-thou pose. I expect this sort of "I am not impressed by your award-winning play" sniffing from Isherwood (see here, for example), but Brantley? And reviewing a play with a bunch of movie stars in it? No women, sure, but still. Very odd.

I certainly won't dispute the observation that That Championship Season is marked by "formal old-fashionedness," nor that it "appears to have been assembled according to the rule book of Playwriting 101, 1952 edition." But I would suggest that this is by design. I'll just repeat what I said in my comment over at dotComm:


I often find that Brantley will make what strikes me as a keen observation, and then go on to draw exactly the opposite conclusion from it. This is a perfect example:


Though littered with four-letter words, “Season” has a clean, mechanical structure in which revelations arrive like well-run trains at a station. Theatergoers who felt hip enough to be lambasted for being middle-class sell-outs but not hip enough for the experimental ambiguities of an Albee play could sit back and enjoy American traditionalism being attacked in the traditional style to which they were accustomed.

He goes on to refer to the play’s “perverse comfort factor.” To me, what distinguishes the play is its discomfort factor — the combination of the old-fashioned, disciplined structure with increasingly unsettling revelations about American values, small-town pieties, and human nature. That’s exactly what he puts his finger on in the quote above, except that he gets the analysis backward. It seems to me the play is designed to let you get comfortable and then make you squirm.

Also: I haven’t seen this production, but I know the play well, and in my opinion this review contains unnecessary plot-spoilers. I guess Brantley figured no one who read it would want to see the show, so he might as well go ahead and ruin it?

Seriously: if you plan to see That Championship Season and you never have before, don't read Brantley's review. I hope to see it myself, so I'll stop there. Hey, maybe this will make tickets easier to come by?

(By the way, dotCommonweal is always a good place to look for me when things are quiet here! Check out what I've been posting lately.)
Posted by Mollie at 9:10 PM No comments: Links to this post