The first time you see In the Heights you're mostly just puzzled by the false starts and stumbles in the plot. Everyone agrees that it's formulaic, but the real problem is that it doesn't follow through on the formulas it adopts. I mean, formulas are formulas for a reason. It's sort of like watching an improv performance where the actors aren't picking up on each other's cues: you think you know where the story is going, and then it just...doesn't.

If you go back to In the Heights a second time -- at least if you're me -- you'll find yourself attempting to figure out where the plotting goes wrong, and the more you think about it the more confused you'll become. "Didn't this show have a long workshop period?" You'll think to yourself. "What in the world did they spend all that time doing, if it wasn't asking obvious questions like, 'Why can't Nina just go someplace a little more affordable than Stanford? Like, any other college?' or 'Why does the lottery win end up being almost irrelevant, when it seems like it ought to drive the whole story?'" It's maddening -- but then a really good number will come along and you'll forget all that for a while. The real dramatic tension and emotional content is all in the songs, and maybe it never goes anywhere, but it's moving just the same.

Last week I made my third visit to In the Heights -- I blogged about my first trip here at Restricted View, and I reviewed it a year later for Commonweal (when I compared it, very favorably, to the terrible Broadway revival of West Side Story). The musical, while still one of the better musical-theatre experiences on Broadway for my money, is starting to show signs of neglect. It could use a visit from the (or any) director and choreographer, to spruce up some of the musical staging -- and light a fire under a few performers, too.

Musical theatre is like any other art form: some people "get it" -- that is, are touched by it -- and some don't/aren't. That said, some shows make the case for the form much better than others, and Fiddler on the Roof (by Jerry Bock, Sheldon Harnick, and Joseph Stein) is one of those representative shows. See Fiddler and you ought to understand why it makes sense, at least sometimes, to tell stories in the "book, song, and dance" format. The show is just about foolproof. I've seen at least one shaggy high-school production and a similarly raggedy dinner-theatre mounting, and both were emotionally powerful in their way. And then there was the 2004 Broadway revival directed by David Leveaux, memorable only because it somehow managed to do away with all the warmth and joy the material offers: it was Fiddler on ice.

Lin-Manuel Miranda (of In the Heights fame) knows all that, which I guess is why he chose a number from Fiddler to liven up his wedding reception. Dave Itzkoff posted the video at the New York Times Arts Beat blog, and it's well worth watching if you're a sucker for musicals (or weddings). I admit, by the time the "Russian" in-laws made their entrance, I was teary at the joyful absurdity of it all.

The wedding (mazel tov, by the way!) was also written up in the "Vows" column last weekend. But I have another little bit of color to add to the story. Last year I was a guest at a gala dinner in support of Symphony Space, and in the course of the evening they presented awards to a number of Broadway personalities, one of whom was Lin-Manuel Miranda. (The other honorees were Brian Stokes Mitchell and Donna Murphy... I was in hog heaven.) Miranda's award was presented by Sheldon Harnick, who wrote the lyrics for Fiddler. And, knowing that this would be the case, Miranda had come prepared to tell us all about how he got his start performing in Fiddler back in grade school -- a little Puerto Rican boy playing a Russian Jew ("At three I started Hebrew school, at ten I learned a trade..."). But what he wasn't prepared for was Harnick's presentation: in honor of Miranda's freestyle hip-hop roots, Sheldon Harnick composed and delivered a "rap." It was really more of a patter song (sans music), but it was impeccable and highly entertaining. And it left Miranda speechless: "Sheldon Harnick just rapped for me!" he gasped when he got to the mic.

Just a couple reminders that "Broadway" and "musical theater" are not synonyms -- and the best of the latter often happens in spite of the former.

I made a repeat visit to In the Heights this past weekend, about which more soon (UPDATE: está aquí). In the meantime, enjoy this previous highlight from the Lin-Manuel Miranda archives.

You know my name 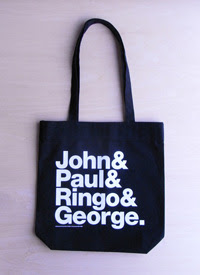 You've probably seen the Experimental Jetset T-shirt design with the Beatles' first names written in Helvetica. It is "an attempt to create an archetypical shirt by stripping down the concept of a rock band to its bare essentials," according to the creators, and I own it in limited-edition tote-bag form (as seen here), thanks to my fashionable friend Betz. I carry it around the city a lot, because it's a perfect just-in-case-I-buy-something bag (holds a lot; folds up small). And because it's attention-getting, people tend to stare at me, or rather at it, which is slightly unsettling until I realize they're just admiring the way my bag "underline[s] the inner logic of graphic design itself" (again, per the designers).

Yesterday I was standing at the corner of 57th Street waiting to cross and I noticed a woman admiring the bag. She seemed pretty excited about it -- excited enough, in fact, that she approached me to say, "I love your bag!" That's when it got weird.