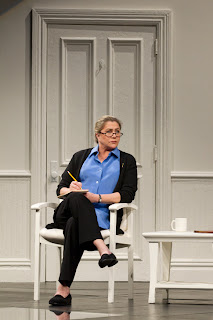 This past weekend I saw a new play, Matthew Lombardo's High, which I intended to review for Commonweal. This morning I saw an announcement that the play will close on Sunday. Too bad; I didn't love everything about it, but I did admire its serious, no-irony-quotes approach to and depiction of religion. In gratitude, I was looking forward to writing a review that didn't feel the need to say "Wuh-oh, this is no ordinary nun!!!" The show has shortcomings, but inability to stop snickering at the mere mention of religious sisters thankfully isn't one of them.

Anyway, I turned my thoughts into a blog post at dotCommonweal. Read it here, and have a very happy Holy Week!

[Photo by Joan Marcus]
Posted by Mollie at 5:24 PM No comments:

Some victims are more victim-y than others

I have already admitted my weakness for true-crime television. Not all the time, mind you; just when I'm too tired to use my brain much and too dumb to go to bed instead. That's how I found myself watching 20/20 last night. The show focused on the 2007 murder of Rhoni Reuter, a case that got lots of attention due to the fact that the victim was carrying the child of former Chicago Bears player Shaun Gayle. I say the show focused on Reuter's murder, but really it focused on the fact that Gayle agreed to be interviewed exclusively on ABC.

I know they have to choose a framework for these stories, but it's awfully annoying when the framework they choose is a bad fit for the facts. In this case, the framework was: Poor, grieving, noble Shaun Gayle! His "girlfriend of 18 years" was murdered, along with his baby, and then he had to endure the indignity of being considered the most likely suspect, first by the police and then in the public eye. Now that someone else has been convicted, it's natural enough to structure the story around Gayle's innocence, and that's obviously the reason he wanted to do the show in the first place. But there's a much more interesting story they could have told if only they weren't so committed to flattering Shaun Gayle. (In fact, the writeup on the 20/20 website is more interesting than the program was.) Here's the summary from the press release:


The headlines exploded when it was discovered that the handsome sports legend was the unborn baby's father, and when rumors circulated that he and Rhoni did not have a committed relationship, investigators put Gayle's hero status aside and became very suspicious. Then more confusion: Not only did the famous athlete provide an alibi, but he pointed the finger at someone else -- a Polish model he once dated who, he says, ended up stalking him. For almost two years the case remained a mystery, until police made a startling discovery... There was someone else who had been obsessed with Shaun Gayle -- his real estate agent, Marni Yang. But it's how the police lay a trap for this woman that has everyone surprised, resulting in a secret recording with the killer's own words detailing exactly what happened.

That "Polish model he once dated"? When the interviewer, Juju Chang, inquired, very gently, as to the extent of their relationship, Gayle replied: "We spent some time together." She asked, still gently, for clarification, and he repeated himself. He meant that they'd had sex. And, it turns out, they had sex not many many years earlier (like, before Gayle and Reuter's eighteen-year relationship began), but fairly shortly before Reuter's murder. At least, that's what I read between the lines, because 20/20 didn't ask Gayle to answer the obvious questions like, "Were you cheating on Rhoni? Did you cheat on her a lot during your 18-year relationship?"

Oh, and "his real estate agent" -- the one who actually did commit the murder? He'd "spent time with" her, too.

If you subscribe to Commonweal -- and for goodness's sake, why wouldn't you? You can get 6 months' worth for just $17! -- you can read my review of Don Brophy's biography Catherine of Siena: A Passionate Life in our latest issue. St. Catherine is one of my very favorite saints and has had my back for some time now, so I was delighted to get this assignment and pleased to be able to recommend the book. It was also nice to have a chance to complain about the prayer card I picked up at her tomb in Rome, which referred to her possessing "the particular privilege of virginity and of patience" but left out some of her more notable, less passive qualities.

I mention at the beginning of the review that Catherine's head is in Siena, along with a thumb, while her body lies in Rome. Turns out my inventory wasn't quite complete, as I noted in a follow-up blog post today at dotCommonweal. (You don't have to subscribe to read that.) Looks like I need to go to Venice!

Posted by Mollie at 6:06 PM No comments: