A couple years ago I bought a journal from Ex Libris Anonymous as a gift for a friend who was expecting. The good people at E.L.A. make journals out of discarded old books, leaving a few key pages of the original inside along with the blank paper. The book I bought was Mother and Baby Care in Pictures by Louise Zabriskie, RN, a sort of proto-What to Expect when You're Expecting published in 1935 (this edition was from the '40s). I spent some time browsing before I wrapped it up for my pregnant friend, and it was so terrific I found myself wishing they'd left more pages intact. Although this review of the book from 1935 suggests that I should be grateful to have missed pages 68-71. Imagine, giving people detailed information on what the labor and delivery process involves! That might fly with your "younger generation," but no "old family doctor" would stand for it. Parents-to-be should be either zonked on drugs or barred from the hospital entirely, the way God intended.

I had a feeling I'd find this book helpful someday, so I scanned a few illustrations for future reference. And now that my own pregnancy is nearly at an end -- and by that I mean the baby is arriving tomorrow -- let's take a moment to see how I've done. 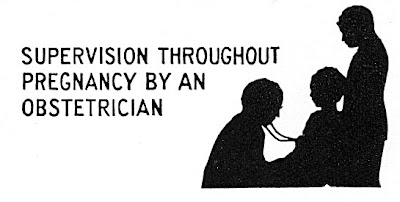 Check. Of course, in the case of this book "throughout pregnancy" basically meant "from about the 20th week," since they didn't seem to expect a woman to know for sure she was pregnant until she was fully showing and wearing maternity clothes, like Lucy Ricardo. (One of the signs of pregnancy listed in the book was that the doctor could feel the baby by palpating the patient's abdomen.) So on this one I was way ahead of the game. My doctor is a woman, though: points off for that? 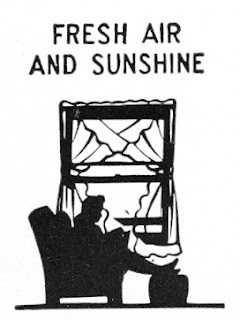 This illustration made me laugh when I first saw it. How frail do they think pregnant women are? I scoffed. Then I got pregnant, and if I were to draw you a picture of how I spent every available moment of my first trimester, I couldn't do better than this. Now, in my defense, it was winter in the city, and we had nonstop record snowfall for months, so getting fresh air outdoors was more of a challenge than usual. But egad, I had no idea I would be so exhausted all the time before I even got to what was supposed to be the hard part of pregnancy. There were days during those first few months (thank God for Christmas break) when I would wake up, have breakfast, and then take a nap. Nothing better than dozing in the fresh air that came through the window to me on our comfy couch. I am chastened.


Here are some other recommendations for the mommy-to-be (click to enlarge): 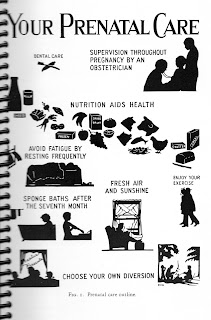 I particularly like the "Choose your diversion" at the bottom. I had trouble getting a good scan of the bottom left corner because of the journal's spiral binding, but I can tell you that the words on the screen/stage say "Theatre Presents." And I definitely took Baby O. to a lot of theatre (although I didn't manage to blog about much of it here). Just last week we saw Anything Goes, and I swear the kid was attempting to tap dance along with Sutton Foster et al.

I can't say I've been much for camping, but I did roast a marshmallow just this weekend. I even went to the dentist during trimester two! And "resting frequently" was definitely on my agenda.

The one area where I've been negligent: "Sponge baths after the seventh month." If the kid is all screwed up I will know what I did wrong.

As for "Nutrition aids health," let's get more detail on what that involves: 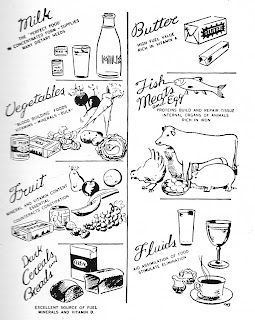 Butter gets its own section! It has "high fuel value"! This is a diet I can follow. I also love the fact that both coffee and wine (is that wine?) are included deliberately under "fluids." It was easy for me to abstain from both for the first few months, because the thought of either turned my stomach. But I missed coffee a lot, even when I couldn't bear the sight of it, and I'm happy to say I've been able to reintroduce it in small quantities since the queasy period passed. Assimilation and elimination are important, after all.

Now all that's left is the baby-having, which begins when I check in to the hospital tonight. Apparently my child is already an overachiever, because s/he is much bigger than a 38-week-old fetus has any right to be. We are talking "one ounce shy of ten pounds," according to the doctor who read my last few ultrasounds. He was plainly amused by this state of affairs (and yes, that doctor was a man). I'm torn between proud and terrified of my giant newborn, who, if the predictions are correct, will not be fitting into any newborn clothes. The books (this one and the other, more modern ones I've consulted) did not tell me to expect that.

But anyway, the kid is more than ready to go, and by tomorrow night Baby O. should be here. And after that I understand it's all a matter of sticking to the schedule. 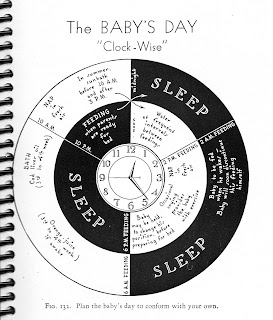 See? All I have to do is "Plan the baby's day to conform with [my] own." But there's so much to keep track of! I have to remember that "occasional crying provides the baby with exercise." And, once the kid is three or four weeks old, a little "orange-juice" is indicated with breakfast. Then there's the midmorning cod liver oil and bathtime, followed by the twice-daily sunbathing (summer babies keep you especially busy).

But I think my favorite piece of advice is this: "Baby may be held, to change his position, before preparing for bed." I can't wait for those brief afternoon position-changing sessions! In fact, I suspect Baby O. will be held a lot more than that -- as much as my weak arms can support his or her enormous frame. (And not just by Daddy and me: Aunt Amy is also ready to disobey this chart.) If he or she is spoiled by all the attention, we'll just have to blame it on my skipping the sponge baths.