To prep for an upcoming trip to Firenze, I've been dipping into Jacob Burckhardt's The Civilization of the Renaissance in Italy. (It's my favorite 19th-century book-length essay on 16th Century Europe -- what's yours?) Burckhardt has a tendency to allude to pertinent facts in the most oblique way possible, and so I am forced to visit Wikipedia to fill in the gaps in my knowledge. That's how I ended up Googling Pope Alexander VI (motto: "There's no conclusive proof that I personally poisoned anyone"), which led me to the entry for his successor, Pius III (motto: "At least I'm not Cesare Borgia!"). And that's how I got to the bottom of the summer's biggest mystery. We can all stop freaking out, because the Montauk Monster -- follow that link for a photo, on the off chance the image is not yet seared into your mind -- is not an unidentified mutant in an advanced stage of decomposition, but in fact the relatively well-preserved corpse of His Holiness Pope Pius III. 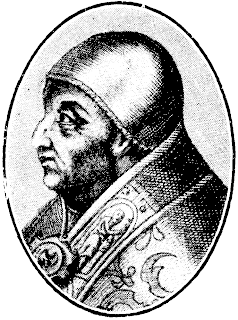 There's this place in the Piazza del Popolo that has the absolute most amazing hot chocolate I've ever had in my entire life. It's sort of kittycorner from the Uffizi, as I recall. It's not hot chocolate weather, but the hot chocolate goes really well with gelato. Just sayin'.

I think you're right. The profile view is quite definitive. Pop Greene

Make sure you write down the location for the hot chocolate place!